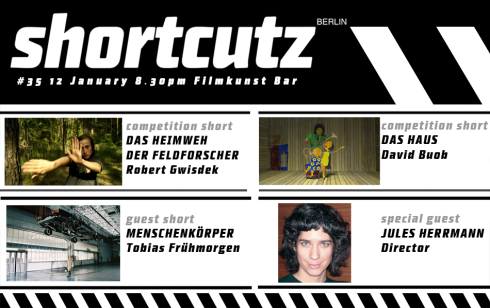 And here we are again! Did you miss us?

Short #1: “Das Heimweh der Feldforscher” by Robert Gwisdek
2011, 15 min
Synopsis: Four field researchers want to go home. Unfortunately, one of them apparently lost his mind. Since the return is not possible as long as he remains in this state, they start a controversy about what to do with him. Where do they come back from and what was the object of their research, becomes a more and more important question.

Short #2: “Das Haus” by David Buob
2011, 6 min
Synopsis: The dream of the little girl is to care for her grandmother, but aunt and mother do not let her do so. There is only one way out.

This Week’s Guest Short: “Menschenkörper” by Tobias Frühmorgen
Germany, 2005, 17 min
Synopsis:  An adaptation of Kafka’s “A Country’s Doctor”.
Dr. Anton is called to a little boy for whom he must make out a death certificate. Happy to escape the patients in his practice, he is taken to a mansion. There he meets the bizarre family of his patient: the importunate sister trying to distract him from his work by whiskey and music, the ignorant mother, the senile grandfather laughing in his wheelchair, and finally the little boy who seems neither dead nor ill. Angry, the doctor is about to leave the mansion, when he suddenly discovers a festering wound…

As for our Special Guest: This week we are looking forward to welcome director Jules Herrmann. Jules will be presenting parts from her films  “SEOUL LOST AND FOUND” and “AUSZEIT” from which the later was shown at Berlin International Film Festival, Section “Perspektive Deutsches Kino”, and won the Grand Prix of Oskariada Festival Warsaw.

We hope to see you on Thursday at the Filmkunst Bar, (Reichenberger Straße 133) in Kreuzberg. The session begins at 8:30 pm and the screenings start at 9 pm. Entrance is as usual free. Come, bring your freinds and watch and discuss with us. See you all there!