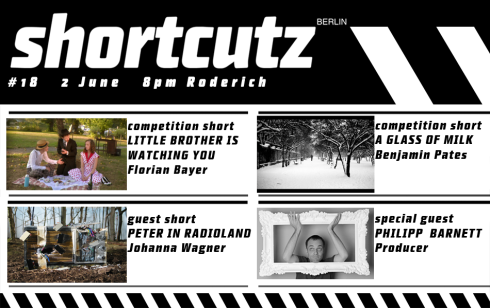 This Week’s Competition Shorts are:

Short #1: “Little Brother Is Watching You” by Florian Bayer
Synopsis: What started as a lovely picnic in the park for the love birds “Frank” and “Liz” is turning into something quite different. A mysterious gentleman appears from the bushes and begins to protocol their every word, takes pictures and investigates into their private life. Without reason it seems. While “Liz” is growingly irritated by the strangers’ presence, “Frank” engages with him in friendly conversation and even treats him as a friend. But what does he want? Where did he come from? We soon find out that the stranger is part of an unnamed organization. It collects data about the citizens private life. For what purpose we don’t know. But they are being friendly and forthcoming. So what’s to worry about? “Liz” finds out the hard way.

Short #2: “A Glass of Milk” by Benjamin Pates
Synopsis: “A Glass of Milk” is a brief minimalist reflection on themes of movement and place based on the musical composition of Porcelain Bridge by the same name. Shot from various first-person perspectives in various locations (Berlin-Kreuzberg and Edinburgh), it aims to evoke the naiveté of childhood while suggesting undertones of yearning and solitude.

This Week’s Guest Short: “Peter in Radioland” by Johanna Wagner

Synopsis: “Peter in Radioland” is a documentary film portraying Johanna Wagner’s own father, who is on sick-leave. He struggles to keep up with the modern digital world where everything is zero and ones. He seeks comfort in his analogue radios, his memories of the past and his loving wife. The film explores the common fear we all have of change.

Our Special Guest for this week is Philipp Barnett. As Producer, Philipp Barnett oversees Twistville‘s (that he co-founded with Matthew Martinez in 2009) in-house productions as well as its financing and production services. Before founding Twistville, Philipp Barnett worked in physical production and development in the United States and Germany,  including Sony Pictures, Warner Bothers, Focus Features, Artisan and Ridley Scott’s RSA USA.